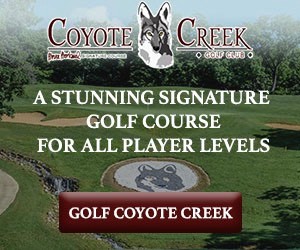 Goal: The courses had a stigma of being labeled as private courses and wanted to let people know that they are open to the public, as well as build overall brand awareness in the Central Illinois area. They wanted to start seeing new faces and building a stronger client base, too.

Solution: We geofenced eleven other golf courses in the surrounding area and delivered Pine Lakes and Coyote Creek ads to them.

Overall, we served 200,001 impressions through geofencing and contextual ads. They had a CTR of .17 over only two months of advertising. The conversion zone recorded that 261 weighted actions occurred or that 261 people who were served ads actually came to one of the client’s locations. We had an average frequency of 8-12 impressions per person throughout the campaign.

I did the creative for this campaign, as well, using Photoshop. The client was very pleased with the look of the ads and impressed with the results and trackability of the entire digital campaign.